Third Time is a Charm!

And in the case of Madrid, this is very true.  The first time I was here was with a group of teachers when I lived in Slave Lake in the mid 2000’s. We spent one day in Madrid at some key sights, and two great day trips to Toledo & Segovia. One of my favourite places was the enormous Retiro Park near the centre of the city. I spent a free afternoon there by the small lake wandering among the grounds, having lunch in an outdoor café, and browsing among the vendors & artists by the small lake.

The next time was in 2015 when I volunteered with Vaughan Town English program as a conversation partner for two weeks. One week was in Pedraza & the other in El Tiemblo, which were both beautiful. That time I also only had one free day in Madrid where I rested & did laundry.

On this trip I was able to explore a new area, and really feel like I got to know the city. She is a friend now, not just an acquaintance.

A colleague and I stayed right in the center of town in a hotel that forms part of the wall around Plaza Mayor (‘Main Square’) which gave me the perfect opportunity to walk the area. Staying in a prominent hotel is something that I would not have done, but she really wanted to stay at the Pestana Hotel, so we made an arrangement between us and did stay there. 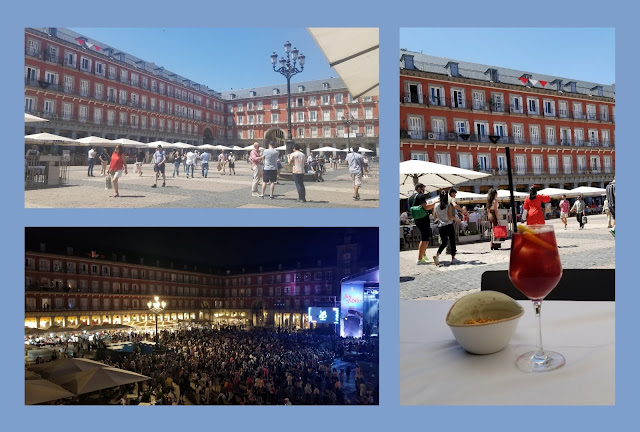 We arrived on the final day of the Fiesta de San Isidro. There were many people in the centre of the city and the plaza was packed with people and bands playing. The next day all was back to normal and after exploring I had a chance for a sangria in a calmer plaza.

The hotel was lovely and the location was fabulous. Walk out the front door and you are in the heart of the old el centro area with narrow streets, many pedestrian only. Walk out the back door right into the enclosed square with 2 or 3 arched entrances on each side! On one day there was a bit of a commotion with police arriving and moving people aside from two of the opposite entrances to the square. In a few minutes comes a procession of horses, an enclosed carriage, two official black sedans and a few more horses.  It was an official procession of an ambassador from another country through the centre of town! 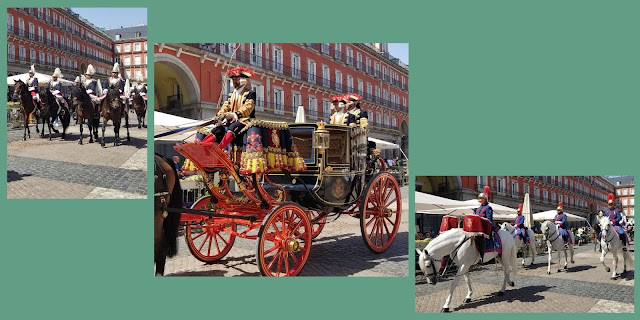 One night we splurged for a fancy dinner at the Four Seasons rooftop restaurant, Dani. They have an amazing signature appetizer dish, Nitro Tomate. It is a dried tomato gelee, in a green gazpacho, surrounded by a ring of baby shrimp tartare, which was amazing! Nasreen and I then shared the Sole Wellington for two and their take on a chocolate éclair. 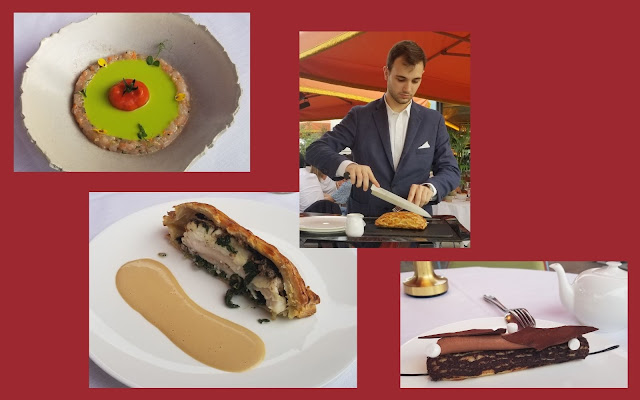 In addition to using the hop-on hop-off bus to see some of the sights I explored the central part of town each day. I found the world’s oldest operating restaurant just a block away (Sobrino de Botin), a street with art/craft supply shops, specialty food shops (lots of chocolaterias), gift shops, a long pedestrian street with shops & cafes between Puerto del Sol Plaza (mile 0 in the centre of Spain from which all roads fan out) & the Gran Via, and a camera shop where I was able to replace my old camera that stopped focusing just a couple of days earlier! 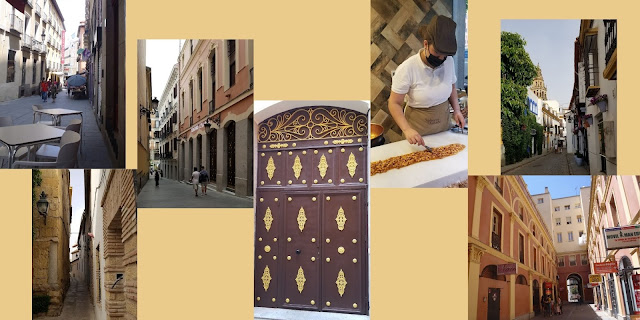 I really loved getting to know and feel the beat of this city’s heart!